Over 35 years after eighty-six countries came together to found Inmarsat with a maritime safety mandate, the London-headquartered mobile communications company continues to innovate and contribute to global connectivity through its network of satellites.

Recently, the company launched its I-5 F3 satellite, the third of four new satellites that will help bring global commercial coverage of Inmarsat’s new Global Xpress (GX) high-speed broadband service online by the end of 2015.

To give you an idea of just how big of a role Inmarsat plays in global connectivity, China’s President Mr. Xi Jinping made sure to pay a visit to the company’s London headquarters last week during his top-level visit to Britain. While there, President Xi wanted to discuss how global mobile broadband services will fit in with his strategic vision for China’s One Belt One Road (‘OBOR’) initiative, an ambitious infrastructure project that will create a trade superhighway connecting much of Asia with Europe, the Middle East and northern Africa. After all, Inmarsat has already signed an MoU with China for a strategic partnership to deliver mobile satellite broadband connectivity throughout China and OBOR.

Earlier in the week, Inmarsat also signed a deal with EUKOR, one of the world’s leading rolling cargo shipping companies, to equip 27 of its vessels for coverage over the India Ocean, the latest in the growing list of shipping companies that have already signed up for the service.

But that’s just another week for INMARSAT.

At the London International Shipping event last month, I met Mr Ronald Spithout, President of Maritime Business Unit at Inmarsat, to discuss some of the things happening over at Inmarsat specifically within the maritime arena:

John Konrad (JK): Is INMARSAT moving into the new world of always connected applications which are already so prevalent on land?

Yes, but we do not take credit for this. The world is moving towards a higher level of digital connectedness and innovation, INMARSAT is working to support what is already happening around us.

JK: Many maritime companies are looking to push the envelope of innovation. I have seen countless speakers this week dictate what shipping will look like in 5, 10, even 20 years. INMARSAT appears to be telling a different, less clear, story.

INMARSAT is very clear on the story we want to tell which is that we do not know what the future holds but we do know how to get there. We do not want to dictate the future to our customers, we want to enable them to dictate their own futures and we are doing this by bringing smart people together and supporting innovative communities around us.

JK: How did INMARSAT develop this strategy of building and supporting a community of developers?

The INMARSAT today is not the INMARSAT of five years ago. If you look at INMARSAT today you have people from VSAT, people who are technology driven, people from Stratos, people who have worked with distribution models and end users, satellite builders. We have formed business units from around these communities which have given us exposure to a diverse set of ideas and broadened the way we think and do business.

Above all INMARSAT has a willingness to learn and that comes from realizing there are many communities outside our industry that are moving at a different pace. Like shipping, the satellite industry is very slow at adopting new technology because you need to plan 15 years ahead. We started building our latest generation of satellites in 2011, now it’s 2015 and these satellites have 15 year life expectancy.

JK: What is driving force for user adoption? What makes users pick up your phone and use all the features?

The better question is ‘what is driving human beings to change their behaviors’? The answer is not the most technologically advanced solution. No, the answer is the application that people like to use. To change behavior you need to build applications that people see the benefit of using straight away, an application with the right user interface, one that feels intuitive.

JK: INMARSAT is now building communities that support application developers. What type of applications do you want built?

The answer is that we don’t know. We do not want to build applications ourselves, we want to support developers who will build applications no one dreamed of before. For instance, in Norway we are moving our office to be close to the Maritime College which is where the largest offshore simulator is located, and where Rolls Royce has its training center. We want to build a test lab there and invite engineers and developers to stop by and test their application on our systems. After Norway we have plans to build these labs in a few more places around the world.

JK: So it’s safe to say that INMARSAT is confident in it’s people and technology but uncertain about how that technology will be used?

Yes but more than uncertain, we also want to be curious and supportive.

JK: There are myriad new applications being developed, the iPhone now supports everything from card games to serious medical research. How will INMARSAT decide which applications to support?

We are developing an open community to support a wide range of applications but our primary efforts at INMARSAT
Maritime will continue to focus on the three pillars of Safety, Crew Welfare and Shipping Efficiency.

JK: For new applications to be widely adopted the core technology has to work. Steve Jobs is famous for saying that apple products “just work”. Facebook is popular, in part, because it loads fast and is always available. How will INMARSAT assure the network “just works”?

We set high standards, not only for the quality of the network and equipment but we also set high standards for our partners. For example, before an INMARSAT equipped GMDSS terminal is installed aboard a ship it must undergo our type approval process. This is a long and involved process that insures the system will work under load in the harsh offshore environments.

JK: As you grow a base of application developers, how will INMARSAT communicate this “just works” strategy?

The answer lies in our safety culture. All innovation at INMARSAT comes from knowledge that we are the safety provider at sea. The GMDSS terminal on a ship must transmit a distress signal even if the ship is sinking in a storm. All of our ground systems are redundant, the terrestrial network is redundant and we have 15 satellites up and running but only need three to cover the globe.

When you hit the distress button on our system you know that rescue is on its way. So we go beyond the Apple’s attitude of “just works”. At INMARSAT it “must work… always” and this safety focus bleeds into everything we do.

JK: It sounds like INMARSAT is moving towards the Apple model of providing the tools and platform for third party developers but there are other ways to build a successful tech company. Google, for example, collects vast amounts of user information and monetizes that information. Facebook focuses on sorting, sharing and manipulating user content.

Yes, INMARSAT’s plans come close to Apple’s model. If you want to build an application for INMARSAT you can become certified. Once certified INMARSAT will provide you with the information, tools and additional training you need to build your app but we do not have plans to look into the content within that app. At the company level we are an operator, we are not a content or data provider. We have high privacy standards and with that comes the view that we do not own or control the data or content.

Simply put we strive to be the gold standard of reliability and the platform to enable innovation. 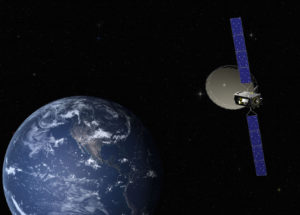